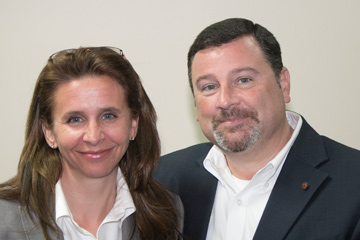 Kari and Stephen Colella, along with three other married couples, founded Annunciation Ministries in March 2015.

From 2001-2014, Kari served the Archdiocese of Boston in Marriage Ministries. While there, she oversaw the development and publication of the first edition of the marriage preparation program: Transformed in Love: Building Your Catholic Marriage. From 2017 – 2019, she served as a consultant to the USCCB Committee on Laity, Marriage, Family Life and Youth.

Kari has a B.A in Religious Studies from Mary Washington University, an M.T.S. in Systematic Theology from Weston Jesuit School of Theology, was formed by the Lanteri Center in Denver to serve as a Spiritual Director, and is working on a Doctorate in Ministry (Spirituality concentration) at The Catholic University of America.

Stephen serves the Archdiocese of Miami as the Cabinet Secretary of Parish Life. Prior to his current position, Stephen worked for the Archdiocese of Boston for 15 years in ministry and development. Stephen has a B.A. in Philosophy and Ethics from the University of Southern California and an M.A. in Theology from Gordon-Conwell Theological Seminary. He is currently a Ph.D. candidate in Ethical Leadership at St. Thomas University and has taught there as an Adjunct Professor in Ethics.

In 2017, they were invited by the Vatican’s Dicastery for Laity, Marriage, and Life to provide consultation regarding high school affective sexual education in light of Amoris Laetitia. That work has evolved into “Good Love” which is a platform for affective sexual education resources. In 2010, they were invited by the Pontifical Council for the Laity to speak on marriage preparation at the International Young Adult Forum: Learning to Love.

Kari and Stephen were married in 1997 and are members of the Equestrian Order of the Holy Sepulcher of Jerusalem and reside in South Florida.